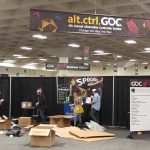 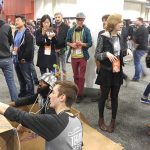 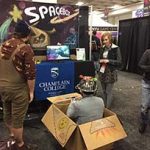 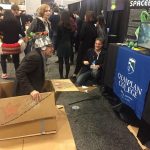 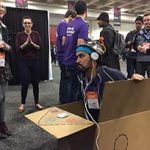 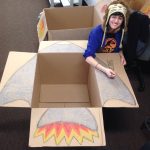 SpaceBox was designed and constructed by an Emergent Media Center (EMC) team of Champlain students mentored by Professor Ken Howell and Terry Sehr, MFA alumni and Faculty Advisor. SpaceBox is meant to bring childhood wonder to life, a magical time when we make believe, taking ourselves on any adventure we imagine. Using an ordinary cardboard box, the team blends reality and imagination. Sitting in the box, you control your character, mimicking child-like play, and going on an outer space adventure! By simply shifting your body, you direct your ship, guiding it through a gauntlet of asteroids towards your goal. To combat enemy fleets in this environment, you can activate a force-field and blaster with the box flaps. This simple, full-body experience captures the essence of imaginative play!

The Champlain College Emergent Media Center’s Sandbox team was selected to showcase their SpaceBox project for Game Developers Conference 2017(GDC). GDC is the world’s largest professional game industry event with over 27,000 attendees. The Alt.Ctrl.GDC showcase is one of the most acclaimed interactive spaces, an on-site exhibition of alternative control schemes and interactions in games that is returning for its fourth year to the conference.

Last month, the Spacebox team made the trek all the way to San Francisco for GDC where attendees including programmers, artists, producers, game designers, audio professionals, business decision-makers and others involved in the development of interactive games and virtual reality gather to exchange ideas and shape the future of the industry.

Here’s what some Spacebox team members had to say about the experience:

“GDC Alt. Ctrl was an incredible experience. I got to show off work that I made at the EMC that I am very proud of, and got to meet a couple heroes of mine in the games industry. I made some great connections with people at places that I would love to work because they were impressed with the project that we had. Not to mention I got a once-in-a-lifetime chance to play some awesome, inventive and creative games!”

“Until GDC 2017, Champlain College students have never participated in GDC beyond simple attendance. Alt.Ctrl.GDC event was an ideal way for EMC to engage with GDC because it matched the students’ skills and the mission of the Sandbox Team so closely. We had an ideal position in the expo hall with lots of traffic. We were busy almost every minute, with people gathered around taking pictures of whoever was in the box at the time. Our students got attention and well-deserved recognition from some important people. The students worked some long hours with minimal breaks, but the rewards, both immediate and longer term, were worth the effort.”

“It was such a satisfying conclusion to the project. Despite some last minute changes, the showcase went more or less smoothly. It was cool to see so many people enjoying our game. People seemed really excited about the project and everyone was asking what we would do next. It was incredible to be among so many amazing developers. I am so inspired by all of the other brilliant games in the Alt.Ctrl showcase.”

Here’s what some game critics had to say about Spacebox:

“At GDC, developers to throw out their preconceptions of what a game controller looks like and explore some strange and wonderful alternatives. One of the top picks was Spacebox, which uses a cardboard box as the controller. The box is kitted out as, of course, a spaceship. By lifting the sides of the box, the player activates the ship’s shields. Hitting buttons on the box’s front flap fires weapons. Watch Nick Robinson highlight his favorites ”

“Spacebox, a Calvin and Hobbes-inspired game that has players sit inside a cardboard box with a goofy colander strapped to their head, tilting and tapping to maneuver an on-screen spaceship through enemy territory. If the developers figure out how to contain their tilt- and tap-sensing technology in a durable, portable container, Spacebox would be something that kids everywhere could play. All they’d need is a cardboard box and a screen…”

“Spacebox came all the way from Champlain College in Vermont, but that distance pales in comparison to the stellar distances traveled in the game. Built by Champlain students from a cardboard box, markers, an Arduino and some Unity code, Spacebox places the player in the guise of a child imagining space flight inside a makeshift box ship”

Members of the Spacebox Team include:

Interested in learning more about the Spacebox team’s experience at GDC 2017? Check out these awesome articles: The team setting up Spacebox at GDC 2017